“In southern Greenland temperatures are milder, the routes are protected from the open sea and there is lots of ice. From my experience, it’s probably the best place in the world for sea kayaking through icebergs “. 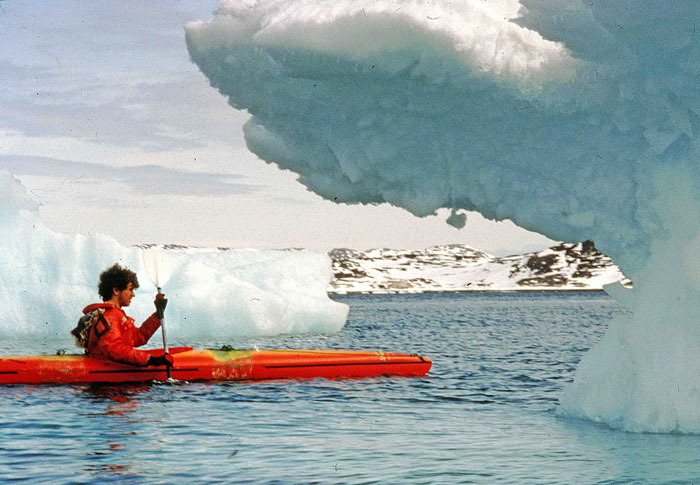 Having traveled 1,200 miles of the west coast of Greenland in kayak in the Three Years Across the Arctic Expedition, did you quickly have a clear idea that the base for the kayak routes would be in the South of Greenland?

It was not so straightforward. To me, the idea of ​organizing trips in Greenland arose while doing  Three Years Across the Arctic Expedition (1990-93), but it was still a hazy idea. First, during the expedition I had had some quite unusual experiences and I thought a lot of people would be interested. On the other hand, I wanted to organize a type of tourism that would not allow the traditional lifestyle of the residents of Thule to be lost. Thus, between 1995 and 1996 I spent two winters in Thule preparing the whole project, but it fell through,  I realized that it is impossible, too complicated and too expensive. It was then, in ’97, when I modified the project of organizing trips in dog sled in winter to that of kayaking in southern Greenland.

So then you were clear that the place was the South …

Indeed. I was thinking it over of course, but neither Assiat or Uummannaq, or Nuuk … or indeed Thule offered the security of southern Greenland that we had experienced at the beginning of the expedition. The temperatures are milder, the routes are protected from the open sea and there is lots of ice, but most of the time it is very calm … the conditions are really perfect, and in my experience, is possibly the best place in the world to sea kayak among icebergs.

How was this landing in the South?

The first thing I did in 1997 when making this decision, was to undertake the first exploration of the area by kayak, which made up of a team of six people. Forty days traveling by kayak across Southern Greenland was a powerful experience. 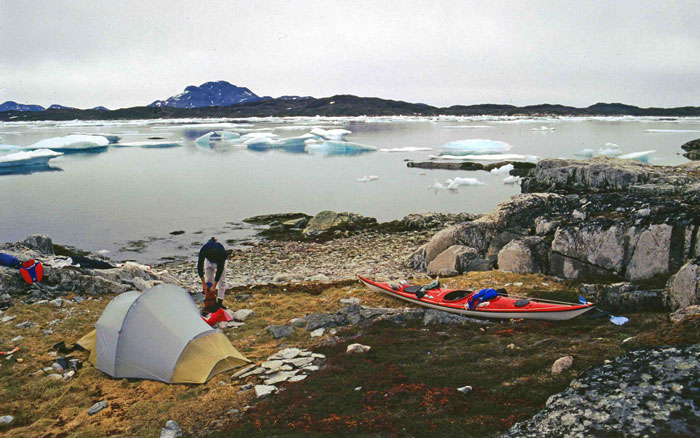 1990. Tuttutooq island. A few days after starting the Three Year Across the Arctic expedition

How was the first trip with travelers?

Conditions were perfect, wonderful … a flagship trip, I think it’s the journey that symbolizes the best experience of Arctic exploration: wild nature is part of ourselves, and you begin to really live on this trip.

Three Years Across the Arctic Expedition

The idea of ​the Three Years Across the Arctic Expedition, 8,400 miles from southern Greenland to Alaska using dog sled and kayak … When did that arise?

I was kayaking in Assiat in 1987. Returning to land through the ice, I was fascinated by this place, I had a vision of this big trip. The biggest project that  I could come up with was to make the trip by kayak and dog sled, traveling around the Arctic and all these small towns.

Larramendi unloads his kayaks in Paamiut

How was sailing in the open sea on the west coast of Greenland?

Well, on the west coast there are many sheltered areas and others of open water. What we did in the open areas was usually to sail at night to avoid the thermal winds and keep a close eye on the weather forecasts. For us everything was new, we didn’t know what to expect, it was a discovery that was what was really fascinating. Little by little, carefully … that was the key of the voyage.

How far from land did you get?

Six or seven miles, really impressive with a kayak.

Did you have to do eskimo roll at some point of the Arctic trip or not?

No. We have practiced  eskimo roll quite a lot but never had to do it because of an overturning … Actually I’ve never been overturned in the kayak in my life. Sounds a bit unbelievable but true. I’ve done it on the beach, playing in the waves and such, but never at sea.

On the way to the island of Narsalik.

Being in Canada, when you went from Resolute to Somerset Island alone, you cracked your kayak against the ice… How was that?

Yes, I was trying to do the Northwest Passage, it was a critical time because I had to use the kayak as sled, dragging it over the ice blocks, and some knock cracked it. I got into the kayak and noticed that it was filling  up with water. Luckily it was not far from the coast and I was able to reach it by going from from block to block. And that was that, I had to give up my attempt to be the first to do the Northwest Passage by kayak… a feat that has not been done yet.

Another chilling moment of the Expedition, when you had to go back to Resolute at night against the wind… How do you remember it?

The most extreme experience I’ve ever had as a kayaker, or non kayaker as well, was when the storm caught me in the middle of Lancaster Sound. I had to make an absolutely gigantic effort to get back to my starting point… Against the wind, at night, exhausted, with black waves breaking over me, totally soaked, icy water stealing my body heat, having to maintain complete concentration so as not to make even the slightest mistake… Twenty-five hours of concentration and effort. It was something quite extreme. The most extreme experience I’ve ever had, for sure.

For voyages of exploration of the  Kap Farvel  and Tasermiut Fjords, what are the differences with the two week classic?

I think it’s important to keep alive the spirit of exploration, to do new things. We are not a business as such. A part of it is this spirit of discovery, which to some degree implicates the involvement of travelers in new projects. So these are two remote trips. The trip to Kap Farvel is actually more complex, a little more difficult really for more advanced kayakers. In the case of Tasermiut, the use of the kayak reminds me why I got into kayaking, because it seemed the best way to explore coastal areas.

The food store system, how is it organized?

We have several food stores, usually two per trip. It is about having lighter kayaks. The first year we brought all the food for twelve days in the kayak, it was too complicated and we saw that it was not working, the important thing was to keep the spirit of autonomy, to be in total harmony with nature and not have a supply boat right next to us … and the deposits facilitate the enjoyment of the trip, because it simplified things.

In your experience, when people finish the kayak trip, have they found what they expected?

Yes, and more! I’ve found over the years with people who have made the journey by kayak and I can say, being absolutely honest, that it has left a deep impression. People remember it as one of the greatest experiences of their lives, not exaggerating. We’re not used to being alone in nature, to move by our own means, losing contact with civilization … The experience is so intense it gets to the core. Actually I have met no one who did not like the kayak trip and a lot of people for whom it has been one of their best life experiences.

© Copyright 2022 Kayaking in Greenland
Back to Top